It’s not often I get a day in.  A day to relax, write, play the ole guitar, and let my introvert flag fly high.  Inside… where no one can see it.

Today has been that day.  It was nasty this morning, so I got a decent workout in, took the trash off, put on a pot of coffee, and settled in.  Oh, coffee.  That was rude of me.  There’s a pot there in the kitchen, freshly brewed and ready to drink.  If coffee’s not your thing, there’s tea, water, or milk.  Help yourself!

Now that we’ve got  Thanksgiving behind us, I guess it’s time to look forward to Christmas.  Christmas already!  It’s hard to believe.  There is a local radio station that has been playing Christmas music for weeks now, and I just don’t understand it.  That should be saved to at least the week before, but I suppose there’s a market for it.  I don’t get it, but anyway. END_OF_DOCUMENT_TOKEN_TO_BE_REPLACED

If we were having coffee, we would have football on the tube and a nice fresh pot of coffee in the kitchen.  Won’t you help yourself to some?  It’s time to freshen mine up, so I can show you the way.  If coffee’s not your thing, we have tea, milk, and of course water.

Hopefully, you’ve had a good weekend.  We have, but it’s been a busy one starting Thursday at work.  It was a long day (and night) leaving too little sleep for Friday, but Friday came anyway.  After work Friday, we went to singing at church, then once home I was wide awake and though sleep would have been wiser, it was guitar time.  I’ve been trying to learn 3am by Matchbox Twenty, and this led to too little sleep for Saturday.  Saturday, I was up at 7am, to get the bikes ready for my daughter and I to go ride for a few hours before the wife and I went to a local college football game.  Home team lost.  Once home, I stayed up too late watching more football and slept a little too little for work on Sunday.  The hour rollback helped with that though. END_OF_DOCUMENT_TOKEN_TO_BE_REPLACED

If we were having coffee, I’d tell you that this is a music kind of night.  As a point of fact, I opted to listen to music on the way home from work tonight.  That drive is normally filled with whatever book I’m listening to on Audible at the time, but not tonight.  Tonight, the music called to me, and I answered.  So sit back and enjoy a cup of something.  I have coffee, tea, and sundry other things to sate you thirst.

As we talk, we can listen to some music.  I’ve got my favorite playlist going.  Willie Nelson (City of New Orleans) is on right now, and who knows what’s next.  Ohh, Elton John, Candle in the Wind!  I love this song! END_OF_DOCUMENT_TOKEN_TO_BE_REPLACED 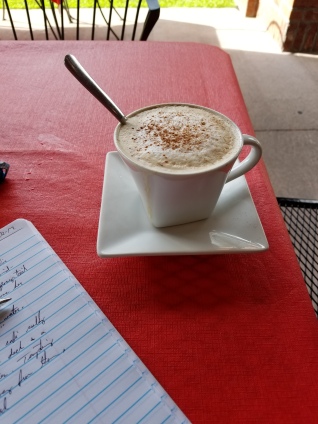 If we were having coffee, I’d say that it’s late and that I probably shouldn’t be drinking this as I raise cup to lip and take yet another sip.  You would know that this is not the first time that I’ve indulged at too late an hour though, and tell me that I’ll be fine.  And you’re probably right about that, by the way.

So, might I get you a cup of something?  Coffee, tea, water, or juice?  You may as well indulge with me, and follow me down the path of poor nighttime beverage decisions.  Don’t worry, I’ll lead the way.

2017 is absolutely flying by.  Weeks seem like days, days like minutes, and so on, and so on.  I can say though, that the past week was a fairly good one as I did some of the things that I’ve been missing out on lately.  Those things included writing a bit, strumming the ole guitar, running, and bike riding.