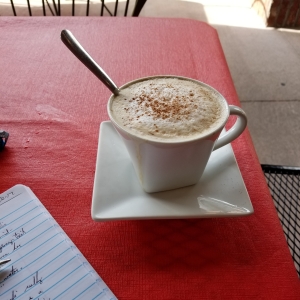 Hello and welcome to my virtual coffee room!  Please help yourself to a coffee, freshly brewed, or a bit of tea if that’s your thing.  There’s a few other things available as well, do feel free to grab whatever floats your boat, blow up your skirt, etc, etc…

If we were having coffee, I’d tell you that I am so close to finishing the very rough first draft of a vampire story that I think will be novella length if I can keep focus long enough to get it there.  Of course it may be longer, I won’t know that until I start filling in all the details that I left out, skimmed over, and blatantly ignored while trying to get through a skeleton of a completed story longer than a thousand words or so.  The longer things never seem to work for me, though I try, OMG, how I try.

We would be listening to Counting Crows while enjoying our drinks and talking about books that we are reading or writing.  There soothing tunes make a perfect backdrop for such conversation, don’t you think?

Speaking of books read, I just finished “The Dark Tower” series.  Alas, my journey with Roland has come to an end, say thankya.  Oh, and what a ride it was.  I enjoyed my time in that world, but it is time to move along.

So, I’ve began a new book.  This one from an indi author whose #FridayFictioneers tales I’ve read for a while now, Iain Kelly.  This is I believe his first book out in the wild, it is titled “A Justified State,” and though I’ve just started, so far so good!  I want to read some more indi titles this year.  I’ve read several in the past and some of them were very good.  It just goes to show that you don’t have to be traditionally published to be good.  Besides, I may be an indi author one day and I would appreciate the support, as I’m sure all the indi’s out there do.

As far as Audible, I’m in the third Steamborn book.  The series has picked up steam as it has moved along.  The first book wasn’t a favorite, but it was good.  The second was lots better, and the third, well I’ll let you know.  I’ve only just begun.

Round Here is playing now.  Don’t you just love that song?  It’s one of my all time faves!

I should probably let you go.  Besides, I need to get a little writing done.  I doubt anyone else is going to finish my story after all.  Not to mention, I want to know how it’s going to end.  Yes, I have an idea, but I had ideas before now, and you know what, those ideas were wrong, so the only way to know for sure is to write it down.

I hope you all have a great week and that you read and/or write something great!  See you next week!