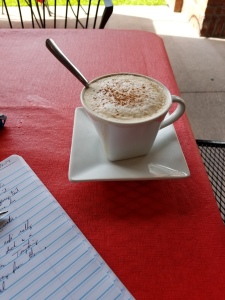 If we were having coffee, we’d be sitting right here at home, sipping some Seattle’s Best, listening to Smashing Pumpkins, and thinking that it would be a really good idea to just head off to bed.  In any case, we have some coffee in the pot, water in the spigot, and some tea bags that can be steeped in said water so we’re all set!

If feels like last week was a busy one, but looking back on it, I’m not real sure why.  There was work, but that was about it.  I got a few miles in, but not that many, and so on and so forth.  It was a good week, but nothing that should have been too tiring until possibly Saturday morning when I got up at 3:30 am to head into work early with plans on leaving early in return.  That worked out, but not without paying for it a bit.  Early mornings normally bring on tired nights and this one was no exception.  By the time we hit out 7:25 movie time (Skyscraper), I was yawning all over the place but managed to stay awake for the movie.  Afterwards though, it was off to bed for a good ten hours!

I’m looking forward to the next week.  I’ve got some editing to do tomorrow that I meant to do today on my serial “Warriors” that is continuing on, and I’m hoping for a good training week along with a good week of work, setting the following week’s vacation up nicely.  Wish me luck that all that goes to plan!

Anyway, I think I will head off to bed since work comes early again in the morning.  No getting off early this time though.  Tomorrow is slated to be more than a full day, but it should be a good one if everything goes how we have it planned.

I know that I’ve been a bit short tonight and I apologize for that.  There’s just not too much of note right now.  I’m writing and running like always and still trying to figure both of those things out.  If you would like to check out this past week’s post, my #FridayFictioneers post is here and the latest episode of Warriors is here.  Hopefully next week I’ll have more to report.

For now, goodnight all!

3 thoughts on “#WeekendCoffeeShare – Nothing to See Here”